That purpose is more or less fulfilled thanks to the rapid montage, use of alluring pop songs and snipets of Hollywood movies, leaving little room to the usual talking heads (including Piketty) we've come to expect from less formally ambitious documentaries, the lesser presence of graphs and the way it glances over many points (the more forgivable being the communism discarded in a few minutes by citing the fall of the USSR) or merely names some of them.
Thanks to those resulting shortcomings (or despite?), it constitutes an effective way for people uneducated with the subject to have a chance to get a basic understanding on it and maybe engage in further researches.

The conclusion is more in tunes with the title, since it acts as an overture to Piketty's thesis by giving him a few minutes to expose it. Who knows? It might lead a small part of the audience to open his book?

Score: 6/10 Sexy film for the 90s/2000s born curious who resisted their curiosity until now and can't watch an ARTE doc.
But will a theatrical release actually reach this population? (I think this film would better fit in Netflix)

When you don't learn anything to the point of rehassing over and over bad thoughts while watching a documentary whose themes were of interest to you, there's something wrong...
Also, for the same reasons it should catch the attention of the uninformed average people, it strongly annoyed me. I felt like the cuts from thing to thing were often random and the movies, however short they were, seemed disruptive. Idem for the few repeated songs. 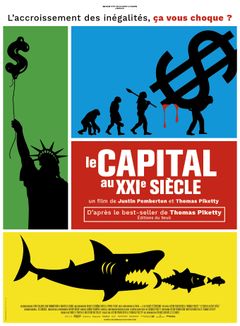