It is the last in the series of works by its very first writer of the genre of romance, Chretien de Troyes. This romance or the Story of Graal is the one that has exercised a great deal of fascination since its writer, Chretien de Troyes, wrote it in around 1181. Everything in this romance invites the attraction of the word, a literary word full of imagination which is aimed at surprising and astounding both the protagonist and finally its readers, and also of giving a sort of attitude which will delimit a particular space. The very prologue is concerned with giving the importance to the word and the deed and their interaction on the particular mind, or soil metaphorically. .
The whole romance is concerned with opposition, in fact it grows on the opposition of different sorts of which one includes the others : that of nature and culture , the other oppositions of
place of forest and the court, the sacred and the profane, courtly (polished), and popular (peasant).
The story after the prologue takes the reader to the world of forest where the young protagonist moves very fast, like an arrow, projecting to leave to join the world of action which is knighthood and which he mistakes for sacred which are Angels and God.

Perceval moves on his trajectory very fast half absorbing words and advice which have a special effect on his young and sensitive mind meeting different kind of people different from him as they inhabit the world of court, which has special rules which need to be learnt in its living environment. Perceval counfounds or mixes everything. He puts in everything his own side, his own vision which the different words invok; he sees the world through his inner focalisation
His exploits become territories of his own dexterity and luck and the very word God is to him wealth and beauty that is purely magic.

His mind notices everything ,he is quick to catch and understand in his way. Particularly, places, places of dwelling catch his mind because of their grandeur that he confounds with the home of God.
The Court of Arthur is also a court which has particular rules and where everyone acts according to some sets of norm of the epoch and where there are rules and customs which include those that are around and keep socially according to their natural propensities and those of oppositions of deed and words. For Perceval is immediately and positively struck with Yvonet , Gauvain and Gornemant but is repulsed and opposed with Keu courty but selfish senechal of King Arthur. Up to the scene of the Graal which is a scene of paramount importance Perceval follows his route of an impetuous hero. After this he becomes more thoughtful and more introspected. He rejoins there Gauvain who is his contrary and his companion the most near. For words and silence , deed and thought are in the heart of this intriguing romance. , its inner conviction and its worldly duty.
It is a romance of possibility of sight known and unknown, heard and unheard- of.of helping and not helping, speaking and be silent. For Silence is gold But not always. One has to break silence when there is a need to enquire , when there is a puzzle three times passing by, of which there is a sacred light that emanates around in the hall..and that light is the Grail itself, a golden vessel of magic power which only young imagination can take in its fascination.And ask bravely What is it and to whom does it serve? Perceval fails and the whole second part is about the other hero about his trajectory into the world of his research, of lost mother and sister , with only a short episode when Chretien de Troyes chooses to give his reader a possible solution to Percival's quest. He did not finish it and returned to Gauvain and his quest and his reparation of the past.

Chretien did not finish Gauvain's part either. He left at the sentence which is to introduce Guenievre's answer as to the messenger from Gauvain, It is the end to Chretien's work and continuations begin of all sorts , Christian and mystique, profane and sacred , with introduction of prose and long narration of metaphorical journey to its allogorical end.

But Chretien's work is the first which is a literary story of mediaval times, contemporary work about life and imagination into the second part of the 12th century , time that wanted romance and plays with it. Magic of sacred and profane.

This is a lovely and intriguing story. Chretien' s is fabulous. The other one, from Wales, Mabinogi's Peredur is harsh and gross and does not possess Chretien's fine art in telling , in recounting and thus reviving curiosity . Chretien fascinates and enthralls the readers. Mabinogi's Peredur is more folkloristic and simple and frightens more with the harsh customs, Chretien is the only one capable of depicting inner palpitations if the individual in its aspirations and trembling. It is his style naive and knowing that gives the zest of the true romance. It is so creative 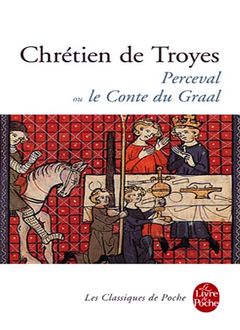