I know Pride&Prejudice is Austen’s most popular book. Mostly because of the BBC’s version with Firth ( <3 ) and the american one with Knightly (-_-). And I really LOVE that book; it’s def her “dreamiest” and most likeable one.
But my favorite will always be Persuasion. Because it’s the most poignant and realistic story. And because it has the most powerful and amazing character of all Austen’s books (men and women combined). Give it a try.
This is a story about feelings that survive time, separation, differences, mistakes and even resentment…and so get to be called true love.
This is a story about a woman who isn’t, by any standard, popular or attractive. But whose fascinating quiet strength, rationality and not-so-mousy character keep holding a whole crazy family together.
This is also about a woman who once deeply hurt a man, and really got hurt in the process. A woman who is stoïcally accepting to be punished for a love she knows she didn’t struggle enough to deserve. 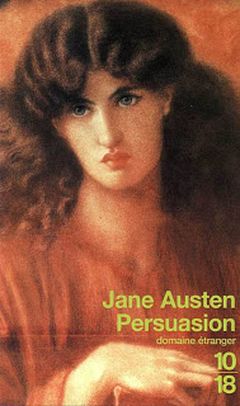