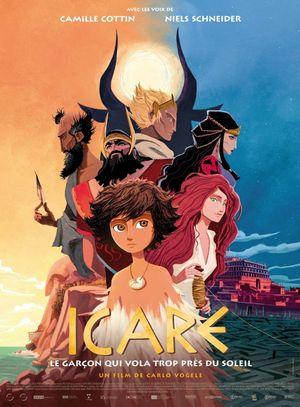 The Minotaur legend twisted into a hollow kiddie fate & friendship tale wich the myth serves simply as a backdrop for.

While trying to flesh them out more than simple mythological figures, the film turns the classic characters into more caricatural figures with a very thin hint of something more (that will probably only be caught by older watchers), and the Icare myth is recycled into a fine but mundane story with no consideration for it or its meaning.

A very cute design for Asterion, the Minotaur turned into an oracle for the hero, who keeps prophetising Icarus' well-known fate. And an overall interesting style proposition (very stylised angular figures) for CGI productions, thanks to the designer who has a comicbook background. The painted backgrounds may stand out a bit against the characters though.

The soundtrack is dynamic when needed but usually relies on classical pieces (ex: Vivaldi's Four Seasons). The two big names (Cottin & Schneider) play rather playfully and Atkine (as King Minos) is as good as usual.

(As any current children-minding production, it plays it very shy with the constitutive sex and bodies while still trying to maintain an air of it.)

Best (and most useless) post-showing encounter with a director thanks to the kids:

"What was the wood cow for?"
Well, you see.... The queen was bewitched by the gods to be attracted to oxes. She couldn't help it. So, when she felt the urge to make love with the god Poseidon disguised as ox, she had to ask Dedalos to build a fake cow she would get into for the ox to make love to her and make her a baby... And then 9months later...

Question from an adult : "Icarus loved Asterion, right?" (As in being in love.)