Anna Karenine is a truly great novel about its eponym character and also a representation of Russian nineteenth century society mainly painted in the customs of its high class but there is also a condition of those classes that come into contact with proprietors, namely the needs of peasantry briefly taken into consideration where it is a question about one of th characters and his preoccupations. ...and only with regards to the proprietor who plays an important role in the society. The novel is superbly harmoniously executed. in a way to bring about its poetics ,the way that feelimgs and emotions play their part in an individual's life and how they are reflected in the society. In other words it deals with love, how it begins, how it is cherished and what it means for certain kind of people that it strikes. It is the birth of love and its consequence. The poetics of love in society is in the representaion of its images and in the acceptance of certain kind of norms of which financial status and position of individuals are very important. It is like a musical art or an opera or a dance to the very end of the work. The sooner an individual understands certain mobiles the better for him or her. The depiction of characters , besides the eponym chracter , shows prominent types who are struck with love and their particular status and prospects for them in their lives that follow afterwards.
Leo Tolstoy depicted marriage institution and love,as the two opposing forces, Love is treated as feckless, futile from the point of view of society because of its irruption of emotions controlled with difficulty when it strikes, change based on strong sentiments whereas marriage on something more permanent as respect, convention, family,the three of which playing an important part in an individual's life. There are happy and unhappy marriages. Happy marriages are all the same. They rest on convention, this marital convention based on family and respect and on economic reason preserve unity in marriage. Anne Karenine slighted all convention as lies and chose to disregard everything for the sake of love for Vronsky. Unfortunately she can't have everything Love for her son and being Serge's mother is something she can't forget. It is her relationship with her son , her lost son because of her love for Vronsky that she can't bear to forget. It means either sacrificing her love of Vronsky or of her son She realised it much later When it was late to go back ...The novel is very important. Together with War and Peace it is considered as the world's masterpiece with its memorable characters. Two more marriages that Leo Tolstoy takes into consideration are to contrast the unhappy marriage, with catastrophic results, For Anna, to act truly has had for consequence more than one unhappy life with family dismemberment,, which causes instability.
Love is an instant, A brief encounter,to borrow the title from David Lynn's film where acting for love will play a havoc on two families and society.
Kitty and Dolly and Oblonsky and Levin are well aware of the family as a unit of preservation . They acted accordingly Rests Anne who is generous, unselfish sensitive and above all a woman of uncommon abilities, a real tragic character. She tends to forget social mobiles She is an impulsive, truthful and it makes her a tragic heroine. For her love is truth and beauty. She acted from heart. She disregarded conventions. Unfortunately she could not bare the consequences of her love act. Her unhappiness because of her love is to see her dear son estranged from her and . for what For Vronsky and doubtful and shameful love something for which she is to blame.
A great novel of society and its pressures. And impossibility to choose one's happiness and being forced to lie.
A novel not to be forgotten, life like a quick dance , one step aside it falls to pieces.

I have written in English because Franch is horribly difficult. Let's hope there is no Eglish-speaking member among you. Because of mistakes But English tolerates mistakes better than French. Mistakes in English are not so striking. They are not eye-sores 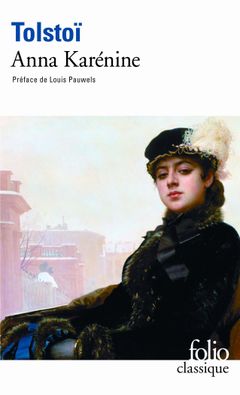