While the "story" (or rather the titular reengineered character) was a refreshing difference compared to the second late Z film, Dragon Ball Super ~ Broly has difficulties to go from the needed background prologue to the meat of the movie thanks to being too preoccupied with providings bites to dedicated fanatics (famous scenes/facts reenactements, reworking of vague background informations, hello Jor-El). So, the structure comes down to a quite long prologue followed by a quite short conflict establishement (with some poor nostalgia recycling as Frieza's motivation) resulting in a very long brawl (chain) devoid of any actual threat for a long time. More opportune visual hommages / winks (essentially to the Broly films) can be seen peppered through the whole fights.
Nothing more to tell about the scenario since this is obviously not something that is particularly worked in this kind of movies.

Same qualities as the other modern DB films: a mix of light humour, colourful characters and indecent all-out physical and superpower action, with some "Toriyama-esque" designs here and there.
Same problem as before: when the CGI puppets become prevalent (let's say the last third of the action segment), it looks pretty ugly. The switch back and forth between drawings and those skeletons comes to be annoying. The 3D camera might be a bit too much exploited but succeeds in giving out some impactful blows. The fights seem less choreographed than before, but that way the new "trilogy" represents the whole descent of DB's action well (just like its shouting contest).

I personally disliked the whole playing around intense colours and strong lights but it certainly adds something to the presentation, contrast being monocoloured landscapes characters and flashes of light. Aside from that, the drawings seem a bit less flat than usual for computer-assisted animation and you get the modern DB colouring chart (that I despise, but hey, digital paint is the present). You'll notice a few instances of bad looking mid-distance (and sometimes close-up) faces, something that should not be so visible in such a large production.
Something that doesn't add anything of value to the overall presentation though is the terrible "songs" (dubstep, someone said) that shout out characters and powers names in the middle of big fighting scenes while the characters are busy yelling at each other. This may be the evolution of the previously heard Frieza song but the "metal" song actually emphasized its scene (sure, it could make you laugh but it felt in line with the character and moment) whereas this one appears as background noise. The rest of the music score is rather poor.

Second pure fan-service film after Fukkatsu no F, but slightly better made.

(Not sure how/why Bejita is supposed to have reverted to a cold killer, by the way.)

PS: if Frieza would tuck his tail, getting his few centimeters would not be source of conflict at all. 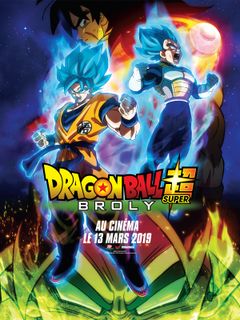